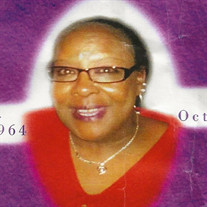 Angela Decarol Green entered into eternal peace on Monday, October 17, 2018 at her residence. Carol's story starts on November 4, 1964, horn to Rosie Mae and Ozie Green. She was born and raised in Meridian, MS with her seven siblings by her... View Obituary & Service Information

The family of Mrs. Angela Decarol Green created this Life Tributes page to make it easy to share your memories.

Send flowers to the Green family.