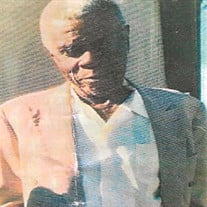 Cliff Durr was born April 22, 1947, to the late Robert and Annie Durr. Cliff confessed Christ at an early age and became a member of East Jerusalem Baptist Church. He departed this life on August 11, 2018, at the Community Life Center, He was... View Obituary & Service Information

The family of Mr. Cliff Durr created this Life Tributes page to make it easy to share your memories.

Send flowers to the Durr family.