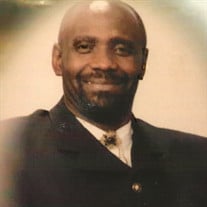 Dan Hamilton Williams was born to the late John D. and Carrie B. Williams on October 5, 1954 in Stockton, Alabama. Dan was a member of Greater St. John Missionary Baptist Church in Alabama. Dan was nurtured by two wonderful women, the late Miss Annie Pearl Bolden and Mrs. Annie Green. Both women trained and loved him as they did their own children. He was very much grateful and appreciative of the love and care he received. Dan departed this life on Friday, August 31, 2018 at the H.C. Watkins Memorial Hospital in Quitman, Mississippi. He was preceded in death by a brother, Johnnie Williams and a sister, Antinette Bolden. Dan was a granddaddy's boy. He learned many, many trades from his grandfather, Mr. Willie Thomas, everything from plumping, electrical, driving, and any machinery. Whatever you needed him to fix whenever and however you needed to get it done. Whatever was going on and whoever it was going on with, he would get right in there with them. Dan worked on jobs from a moving company to a shipyard to offshore where he continued his employment with Chevron. In 1996, Dan became disabled. Dan was married to Mrs. Loretta Johnson while residing in Alabama and to this union, one son, Dan E. Williams, was born. Later, Dan moved to New Orleans, Louisiana where he met Mrs. Barbara Nobles. In 1983, Dan then moved to Mississippi where he and Barbara were united in holy matrimony and he became father to her daughter, Kamesha. To this union, three daughters were born. Dan united with the St. Mary Baptist Church under the leadership of Rev. Curtis Walker, Sr. who in later years crowned him Deacon Dan Williams. He worked hard in and around the church inspired by his father, the late, Deacon John D. Williams. Sometimes his goodness was taken for granted but he knew who his rewarder was. Dan had a passion for the law, bail bonding, bounty hunting, and the wellbeing of the county. He worked with the Clarke County Development Board and worked with The Poor Man's Bail Bonding Company. Dan leaves to cherish his memories of laughter to his wife, Barbara; daughters, Kamesha (Anthony) Moss and Kelesha Williams of Shubuta, Mississippi; 1st Lieutenant Andresha Williams of Vicksburg, Mississippi, and Dr. Danesha Williams of Blytheville, Arkansas; one son, Dan E. Williams of Dothan, Alabama; one granddaughter, Jadaire Taylor; three grandsons, Jallen Taylor, Jevonnte Taylor, and special grandson, Jayce Tribune; one sister, Vernice (Ronald) Singleton of Moreno Valley, California; sister-in-law, Donna (Edward) Williamson of Waynesboro, Mississippi; two brothers-in-law, Eugene (Gladys) Nobles of Shubuta, Missis-sippi and Prentis (Arlean) Nobles of Vossburg, Mississippi; three aunts, four uncles; two nieces, Akilah (Scott) Johnson of San Diego, California and Antinett Singleton of Arizona; one great niece, Olivia Johnson of San Diego, California; many other relatives and friends. Dan also leaves to cherish special friends who were like sisters; namely, Ann, Jean, Lavern, Loretta, Regina, David Arlean, Debra, Shirley, and Caficene; one who was like a brother, Reginald Green and a great friend Doug Joseph.

Dan Hamilton Williams was born to the late John D. and Carrie B. Williams on October 5, 1954 in Stockton, Alabama. Dan was a member of Greater St. John Missionary Baptist Church in Alabama. Dan was nurtured by two wonderful women, the late Miss... View Obituary & Service Information

The family of Mr. Dan Hamilton Williams created this Life Tributes page to make it easy to share your memories.

Dan Hamilton Williams was born to the late John D. and Carrie...

Send flowers to the Williams family.