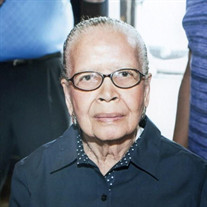 My mother will be missed. She was a very devoted mother and grandmother. She wanted her decedents to be trained and educated to get the absolute most of life that was possible. She was born in Pachuta MS to two devoted and very loving parents. She spent her young years on a farm in Pachuta. She went to Harris High School in Meridian MS and graduated as the class valedictorian in 1941. She wanted to attend college, but had no way to do it. World War II had started and she made the decision to join the Army. Ft. Huachuca eventually became her new home. She was a hospital admissions clerk for Station Hospital Number One. During these years she met Roy Brown, the hospital administrator, and just after the war they were married. Her husband had a career as a professional soldier for 31 years starting in WWI. Now, as a veteran, she took full advantage of the GI Bill that was available to military veterans and got the college degree that was her dream. She did not stop there and also added a teaching credential to her resume. She eventually taught high school Algebra and Geometry. During her time in the classroom, she found time to also add a Master’s Degree in Library Science to her resume. Because of her back ground and training she followed her son’s education process very closely. She improved his reading skills by making him read virtually every Land Mark series history book that had been written during the 1950s. She also felt that part of a good education involved musical training. As a result, Rodney was given five years of classical piano training. To make sure that her son was doing things right with his piano training Edna also made herself a piano student to better guide his practice at home. She was also active in the Cub Scout program as a Den Mother for her son. Her involvement in her son’s education did not stop at the basics. When Rodney entered middle school and began to do homework it was graded by Edna and handed back to him to correct before turning it in the next day. This practice continued all the way through high school. After thirty years of teaching, she retired and began to travel going from Japan to Egypt. Shortly after entering into this new career, she joined some WWII Woman’s Army Corp veteran organizations. She was very active in these groups. She even appears in a documentary film about the Women’s Army Corp. in 1999 called “Free A Man to Fight.” Two years before she appeared in this film, she was part of the color guard that dedicated “THE MILITARY WOMEN'S MEMORIAL,” at Arlington Cemetery. Edna never sat still. There was always work to do. She had classroom students for thirty years, Cub Scouts for a time, grandchildren to look after, and her work with WWII Women’s Army Corp veterans. When she made time, she traveled across the world. Rest in Peace mother. I’m sure that where you are now you are already organizing activities for the departed souls that are there with you. Rodney Roy Brown DUE TO THE COVID-19 PANDEMIC, THE FOLLOWING GUIDELINES ARE BEING PRACTICED FOR THE SAFETY OF OUR FAMILIES BEING SERVED AND OUR STAFF: Viewings: 1. All viewings are limited to one hour and no more than 10 people are allowed in the chapel at one time where social distancing is not possible. 2. Temperatures must be taken upon entering the lobby. Temperatures 100 degrees or more will not be allowed to enter. 3. All visitors must wear a mask and are not allowed to touch, hug or kiss the body. Graveside Services: 1. All services are Graveside. Those in attendance are asked to practice social distancing where possible and wear a mask.

My mother will be missed. She was a very devoted mother and grandmother. She wanted her decedents to be trained and educated to get the absolute most of life that was possible. She was born in Pachuta MS to two devoted and very loving parents. She... View Obituary & Service Information

The family of Mrs. Edna Brown created this Life Tributes page to make it easy to share your memories.

My mother will be missed. She was a very devoted mother and
grandmother....