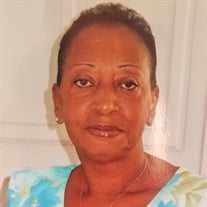 In the beginning, God skillfully created the heavens and the earth. He made all things good in his sight. He created man and woman and he knew that his creation would be refined through a bond between Walter and Luerether Gordon of Bailey, Mississippi. He knew that this union was predestined to produce a special gift that would be loved by many. On September 3oth,1944, God allowed his skillful creation to be celebrated through the life of, Everleen Gordon. Everleen affectionately known as 'Lena' was born in Bailey, Mississippi and moved to Detroit, Michigan as a teenager. During her life, Everleen met and married the love of her life, Arthur Harden. This blessed union was formed, June 26, 1965. Their marriage is a true testimont of what Love is having celebrated 55 years of marriage. Out of this union came two beautiful daughters, LaShun and Kimberly Harden. Everleen gave her life to Christ at an early age. She became a member of Second Ebenezer Baptist Church under the late, R. H. Griggs and current Bishop, Edgar L Vann Jr. Everleen served cheerfully as an usher for the house of the God. Everleen worked faithfully at Children's Hospital of Michigan. Everleen dedicated over 40 years of service to the hospital prior to her retirement After retirement, Everleen moved back to Bailey, Mississippi and later joined, Greater Outreach Missionary Baptist Church under the leadership of Pastor, Obediah Clemons. Lena was a manicure of nature. She enjoyed landscaping and working in her yard. She loved planting flowers and everything that had to do with perfecting her lawn. Lena also enjoyed watching basketball with her husband when she wasn't in her yard. Everleen was very meticulous about everything she did and was a true fashionista. She loved her family and friends and was always there to listen, give advice or lend a helping hand. She had a contagious smile and a rambunctious laugh that would brighten anyones day. Everleen received an invitation from God above to come home to a house not made with hands but eternal in heaven. On Friday, December 18th, 2020, Everleen Harden accepted the invitation and departed this earth. She now joins her mother and father, (Lurether and Walter) and her siblings (Gloria Dean Gordon, James Edward Gordon and Walter Lee Gordon) in that heavenly place. Everleen leaves to cherish her memories and to celebrate her life: Her devoted Husband, Arthur Harden of 55 years; her "Girls", LaShun Harden, Kimberly Ann Harden and Bonus:.Tiaughter, Laretha Nicole Gordon-Williams (Carl Williams); Bonus Grandson Carl Williams Jr. "CJ" who affectionately called her Auntie Gran; Brothers-Luther Gordon (Patricia), Richard Gordon(Brenda), Walter Bernard Gordon(Tamara), Andre Gordon(Doris); Sister-Gail Denise Gordon; Bonus Mother-Addie Gordon; Aunt-Lue Willie Gordon; Sister-in-laws-Inez Gordon and Regina Gordon. She also leaves to cherish a host of nieces, nephews, cousins and so many special Family, Friends, Neighbors and Co-workers who meant so much to her.

In the beginning, God skillfully created the heavens and the earth. He made all things good in his sight. He created man and woman and he knew that his creation would be refined through a bond between Walter and Luerether Gordon of Bailey, Mississippi.... View Obituary & Service Information

The family of Mrs. Everleen Harden created this Life Tributes page to make it easy to share your memories.

In the beginning, God skillfully created the heavens and the...

Send flowers to the Harden family.