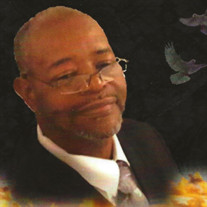 Fredrick Bernard Cole, Sr. was born April 19, 1956 in Meridian, Mississippi to the union of David Cole and Lucie Harris Cole. At an early age, Fred confessed his hope in Christ and unites with Little hope Missionary Baptist Church in Toomsuba, Mississippi under the leadership of Reverend JW Marshall. On August 25, 1978, he married his soulmate Patricia Beard Cole and to this union of 41 years four beautiful children were born. Fred was truly a unique and kind individual that was good at everything he set his mind to. he enjoyed spending time with family and friends wether it was fishing, playing pool or just visiting catching up on the events of the day. He was an avid cook and became the master of grilling, but his specialities were chicken wings and ribs that were described as nothing but finger licking good. His most precious memories were spent with his wife, kids and grands making sure they knew what love was all about. He demonstrated this love faithfully to his mother as he always was coming by to check on her even if he was not feeling well himself. Professionally, he helped lead a team for over 25 years working for Southern cast and then he went into business for himself doing HVAC services for an additional 20 years. On Mother’s Day, May 10, 2020 at Jeff Anderson Regional Hospital, God dispatched an angel to receive Fredrick Bernard Cole, Sr. back to himself. Fred was preceded in death by his father, David Cole. He leaves to cherish his memories: a devoted wife, Patricia Cole and a loving mother, Laurie Tanksley (Meridian, MS); two sons: Fredrick (Krystal) Cole Jr. (Vicksburg, MS) and Reginald (Brittney) Cole (Meridian, MS); two daughters: Latoyia Beard (Meridian, MS), Latasha Latrese (Arthur) Johnigan (Meridian, MS); three sisters: Jerelene Lewis (Meridian, MS), Gina (Ronald) Williams (Russell, MS), Elaine Ruffin (Meridian, MS); two brothers: David (Juanita) Cole (Lady Smith, VA) and Lloyd Cole (Meridian, MS); nine grands: Tyler and Crystal Johnson; Tevin and Tanaesha Johnigan, Kennadi, Katelyn, Fredrick III, Haley and Raelynn Cole; and a host of aunts, nieces, nephews and other relatives.

The family of Mr. Fredrick Bernard Cole, Sr. created this Life Tributes page to make it easy to share your memories.

Send flowers to the Cole, family.