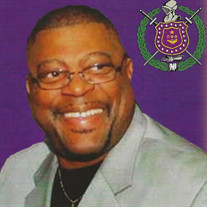 Harold Eugene Hopkins was born May 20, 1953 to the late Percy Hopkins and Lillian Stringfellow Hopkins in Meridian, Mississippi. Harold was baptized at an early age at the New Prospect Missionary Baptist Church, Savoy, Meridian, Mississippi under the pastorate of Rev. B.J. Hines. Harold graduated from Meridian High School in May 1971 and he then attended Mississippi Valley State in lttaBena, MS where he graduated in May 1975. In June of 1976 he married Hiweeda Coleman and to this union one daughter was born. Harold remained an active member of New Prospect until moving to the Dallas, Texas area where he was an active member of St. Luke Community United Methodist Church under Dr. Zan W. Holmes where he served there from 1982 to 1997-Harold united with the Greater Ideal Baptist Church in 1997 and served until 2003. Harold later united with Bethany Missionary Baptist Church where he served faithfully. Harold acknowledged his calling to the ministry in 1994 at St. Luke Community United Methodist Church during the pastorate of Dr. Zan W. Holmes. Rev. Hopkins has served as an associate minister at Bethany Missionary Baptist church under the pastorate of Rev. Albert K. Haynes, Sr. Reverend Hopkins served in several ministries such as an assistant Sunday school teacher for the youth; member of the marriage ministry, and speaker for the Senior Citizens home each 1st Sunday. Harold was employed with Bell South and AT&T from 1979 until his recent illness and death. He was employed as a teacher in the Meridian Public School District in Meridian, Mississippi from 1975 until 1979. Harold was one who persevered in his pursuit of personal goals he set for himself. When unfortunate Circumstances forced him to discontinue his goal to become a member of Omega Psi Phi Fraternity, Incorporated during the 197o's, he never gave up and successfully achieved that goal in the Spring of 2003, when he was initiated into the Theta Alpha Chapter where he served as Chaplin. Harold was Respected by all members of his Fraternity as a loving caring brother. His infectious personality allowed him to touch many lives, to include members of his family whom he loved dearly. Harold loved young people and encouraged them all to set goals and never give up on Reaching them. Harold brought a "special joy" to the many family gatherings. Harold was preceded in death by a sister, Letha Mae Walker, and a brother John Edward Hopkins. He Leaves to cherish his loving memory his beautiful wife of 16 years Tracy Hopkins; his daughter Breannah (Jarvis) Woulard; Stepsons, Kedrick Baker and Rodney Baker (Rosemary); Four grandchildren, Jada Shepherd; Rodney Baker, Jr.; Jaxon Woulard; Royal Baker. His siblings, Mary Alice Boyd, Cincinnati, Ohio; Dorothy Amos (Ben), Meridian, Mississippi, Rev. Bennie J. Hopkins, Sr. (Mary) Meridian, Mississippi; Jimmy L. Hopkins, Hattiesburg, MS; His Mother-in-law, Ms. Birdie M. Smith, Dallas, Texas, sister-in-laws, Maxine Hopkins, Leona O'Koraba (Emmanuel), K. Renee Harrell, Stephanie B. Darlington; brother-in-law, Michael Baker (Jenifer); and a host of nieces, nephews, relatives and friends.

The family of Rev. Harold E. Hopkins created this Life Tributes page to make it easy to share your memories.

Send flowers to the Hopkins family.