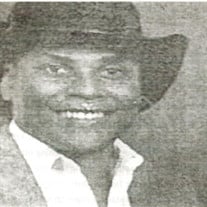 Harrison Lewis, Jr. (given birth name) was born May 02. 1957 and died Saturday December 16, 2017 in Meridian, Mississippi. Harrison Lewis, Jr. attended St. Joseph Catholic School, Meridian High School and Tuskegee Institute. While attending Tuskegee Institute, Harrison Lewis, Jr. met and married Cecilia Tillman of Tuscaloosa, Alabama. Their union produced a son, Harrison Pacheco Lewis, Ill and a daughter, Maria Anne Lewis. Harrison Lewis, Jr. is preceded in death by his father (Harrison Lewis, Sr.); sister, Mary Ann Kelley (Alfornia) and brother, Wilmore Johnson. Harrison is survived by his mother (Helen W. Lewis); sisters, Catherine Wydermyer (Larry), Vivian Webster (Alfred), Joyce Garrison (Clifton), Helen Marie Lewis, Audray Lashelle Lewis and brother, Eric Lovell Lewis (Gaye); and Soulmate, Aprille Jackson; many nieces, nephews and cousins. Harrison Lewis, Jr. was well-known by TruthMaster, Harrison, Harry, Homeboy and Oil Can. Harrison was christened and baptized at St. Joseph Catholic Church, Meridian, Mississippi where he served as an altar boy and a member of the Holy Childhood Association. Harrison continued to regularly attend Mass and remained very involved in regular devotion and prayer services. Most people will remember Harrison playing Little League Baseball for Magnolia Parks throughout his childhood and into his adult life, receiving a Baseball Scholarship to Tuskegee Institute. Harrison was known for pitching his fastball and his spitball. Harrison had a saying that he would end his conversations with, "Keeping it in the short grass" and his siblings would know that it was another way of Harry honoring our father. During high school, Harrison played basketball for Meridian High School Wildcats and contributed to leading them to many victories. Among Harrison's many accomplishments, he was a strong advocate on behalf of political and social justice; health education; influencing a welcoming attitude of public servants toward ALL people; preservation of St. Luke Masonic Cemetery; and he was an entrepreneur for more than 30 years as a conservator/guardian caring for others. Harrison Lewis was the Owner and Publisher of a weekly tabloid newsletter, The TruthMaster. Harrison Lewis consistently challenged politicians and policies that governed Meridian in his newsletter that was distributed throughout Lauderdale County. The TruthMaster was the voice of the silent. Most people would comment, "Truth Master will say what I want to say, but I am too afraid to say." In 2004, Harrison was a candidate for Mayor of Meridian. Harrison was the radio host of the weekly TruthMaster Talk Show. The Truth Master Talk Show was a favorite with listeners, because of the high energy and information that was generated by Harrison and his guests. Harrison maintained a great relationship with law enforcement and was an advocate for police officers to receive free donuts and coffee while patrolling the neighborhoods. Harrison Lewis's family is deeply grateful for the tender care he received from the ICU staff at Rush Memorial Hospital, Meridian, Mississippi. Special thanks also to Aprille Jackson for her support and assistance in Harrison's final days. Services entrusted to Berry & Gardner Funeral Home.

The family of Mr. Harrison “Truthmaster” Lewis, Jr. created this Life Tributes page to make it easy to share your memories.

Send flowers to the Lewis, family.