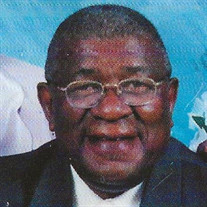 On September 25, 1938, Amos and Climmie Brown were blessed with a healthy baby boy. Henry was brought up with the respect of values and love at an early age. After attending Taylor School, Mt. Pleasant Elementary School, and Harris High School in Meridian, MS. Henry stepped out on faith and took a three day journey and moved to Yakima, Washington after high school. After working on an apple Orchard, Henry decided to move over to Seattle and was hired on as a construction worker, in which he played a major part in building interstate 5. When Henry was not operating heavy machinery, he found time to fall in love and marry Emma Mae Lawson. On February 6, 1965, they were blessed to have a baby girl, Felicia. As the years rolled by, Henry later remarried Helena Carney, which would become his Soul Mate. after Henry retired, he purchased a motor home and traveled all across the United States. Henry and Helena both loved to travel at any given time to go visit family. Henry was a faithful member of Okatibbee Missionary Baptist Church, where he was the Head Usher as well as serving in the Culinary Ministry. You would catch Henry on the tractor working on a garden, hunting, fishing, or cooking some of that good soul food. Helena wouldn’t be far away either, simply because their love was inseparable. Even after retirement, Henry was proud to uphold the duty of being a very protective grandfather of Acacia. They will always have the love that not even death nor the grave will separate them. Preceding in death is his mother and father, two brothers, Amos Jr. and D.L.; son-in-law, Clyde Brown and ex-wife, Emma Lawson. Even though Henry slipped away on April 17, 2012, he left love that stretches all across the United States. he has left memories to cherish with: his brothers: Luther Brown (Ernestine), Betty Baylor, Otha Brown (Martha) and Dorothy, all of Seattle, Washington; his daughter, Felicia Brown will continue to share his legacy that he has left behind and forget not the benefits of his unconditional love. His only surviving uncle, Luther DuBose will cherish the many memories spent together down through the years. The grandchildren: Acacia Brown, Umphria Matson, Selina Winnett, Kevin Winett, Damara Carney, Gina Virgilio, Reginald Carney Jr., the late Desirae Douglas, Shanta, Chanelle Johnson, Frank carney III, Emilio Carne, shall never forget the tender loving mercies and heartfelt presence each time with him. A “heap” of nephews, nieces, cousins, great-grandchildren and friend to help carry the legacy left behind.

On September 25, 1938, Amos and Climmie Brown were blessed with a healthy baby boy. Henry was brought up with the respect of values and love at an early age. After attending Taylor School, Mt. Pleasant Elementary School, and Harris High School... View Obituary & Service Information

The family of Mr. Henry Lee Brown created this Life Tributes page to make it easy to share your memories.