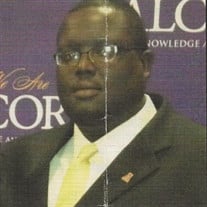 Henry Stringfellow, Jr. was born August 21, 1984 in Meridian, MS. He departed his life October 27, 2015 at Baptist Medical Center in Jackson, MS. He was the youngest child of Verna Fountain Stringfellow and the late Henry Stringfellow, Sr. Henry Jr. accepted Christ at an early age and was baptized at New Hope Missionary Baptist Church under the leadership of Rev. Elijah Jackson. He grew up in the church as an active member and was also a devout Sunday school student and member of the choir. He ventured into adulthood and was ordained as a deacon under Rev. Barron Banks. Henry Jr. was a modest, yet fun-loving young man. He thoroughly enjoyed traveling, coaching sports, grilling, and spending time with his family. His nieces and nephews referred to him as "Uncle June Bug." They always looked forward to the great times they would have laughing, playing, and joking with him. His career was very important to him. Henry received a B.S. degree in Physical Education from Alcorn State University in 2008. He began his career as a physical education instructor with the Bay Springs Public School District and later became an educator/coach with the Jackson Public School District. He was employed with the Jackson Public School District at Chastain Middle School for two years. He was a teacher and head coach at Bailey AP AC Middle School when he departed this life. Henry Jr. leaves to cherish a loving and devoted mother, Verna Fountain Stringfellow of Meridian, MS; a grandmother, Estella Fountain of Lake, MS; four sisters, Lynn Stringfellow of San Diego, CA; Carolyn Ikpeama (Christian) of St. Louis, MO; Charlotte Doss (Jerry) of Petal, MS; and Constance Watts (Janone) of Meridian, MS; two brothers, Henry Earl Stringfellow (Yolanda) of Las Vegas, NV; and Daryl Stringfellow (Raychelle) of San Diego, CA; a very dear friend, T'Naizha Brown of Meridian, MS; three nieces; six nephews; also, uncles, aunts, cousins and a host of friends.

The family of Mr. Henry Stringfellow, Jr. created this Life Tributes page to make it easy to share your memories.

Send flowers to the Stringfellow, family.