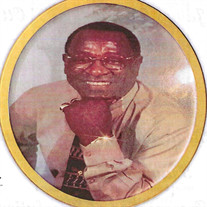 He transitioned from his earthly home on Wednesday, April 22, 2020. He was born June 2, 1950 in Meridian, Mississippi, the third oldest child of the late E. P. Ott and Minnie McCoy Jackson. JAMES was well known in Meridian and the surrounding areas. Young and old, respectfully addressed him as Mr. Ott; those who grew up with him, his closest friends and loved ones affectionately addressed him as J. C.; in his profession, he was widely known as "The Insurance Man" by his clients and people he met. The titles could go on and on. On January 19, 1970, J. C. married Lettie Mosley. This union was blessed with three beautiful children, of whom he loved dearly and was very proud of each one. After many life experiences, some good and some bad, he made the most,wonderful and valuable decision that any human being could ever make. HE CHOSE JESUS CHRIST AS ms SAVIOR, to reign and rule over his life and as an advisor to lead and guide others to Christ. Upon uniting with Saint John Missionary Baptist Church as his home church for worship, James immediately became an active and faithful member. He was blessed to have a pastor, the late William Charles Griffin, Sr., who devoted time and effort in providing proper training for leadership to the congregation, especially the men. James cherished the time and effort invested in mentoring, teaching and guiding him, and made every effort to impart that training to others. He took great pride in learning because he wanted to be an effective leader in his family and productive in his work for the Master as he sought to lead mankind to Christ. His knowledge and wisdom grew as he developed into a true and earnest vessel for God. JAMES worked on many ministries within the church. He mentored and taught the Young Men In Mission and the Laymen. He also served in the.Ushers' Ministry, Sunday School Ministry, Music Ministry, Brotherhood Ministry and Deacon's Ministry. Although he loved each ministry, the most cherished and sacred ministry for service for him was the Deacons' Ministry. He was ordained July 8, 1979, a date that was etched in his heart forever. He was dedicated and highly respected the assignment as deacon, serving faithfully until God called him home. He had many great achievements, awards and recognitions in his professional life. Workforce opportunities included the following: the small, in-house neighborhood stores, cleaning services whereby he cleaned businesses, Rush Hospital, lumber and wood supply companies, Peavey's Electronics, Ward's Furniture Liquidators, and various insurance companies, from which he later retired. On August 2, 1980, he entered into holy matrimony with Mary G. Carr and her two young babies. After two years of marriage, God blessed them with a set of twins, binding together a family of seven children. We counted it all joy. JAMES was preceded in death by his father and mother, two sisters, Judy and Joyce, two brothers, Willie James and Charles and a grandson, Alexander. Those who now cherish his memory and await a glorious reunion are: his loving wife of thirty-nine years, ten months and twenty days, Mary G. Carr-Ott; four sons, James C. (Kacie) Ott, Jr., Jonathan Charles (Bridgette) Ott, Jeremy Channing Ott, all of Meridian, Mississippi, and Corey Carr of San Diego, California; three daughters, Veronica Ott and Conchita Ott, both of Atlanta, Georgia, and Kimberly (Terry) Cullum of Hattiesburg, MS; two sisters, Minnie Lee (Billy Ray) Kidds and Arthur Marie Collins, both of Meridian, Mississippi; thirty-two grand-children, nine great-grandchildren, a host of adopted children, nieces, nephews, cousins and friends.

He transitioned from his earthly home on Wednesday, April 22, 2020. He was born June 2, 1950 in Meridian, Mississippi, the third oldest child of the late E. P. Ott and Minnie McCoy Jackson. JAMES was well known in Meridian and the surrounding... View Obituary & Service Information

The family of Mr. James Charles Ott Sr. created this Life Tributes page to make it easy to share your memories.

He transitioned from his earthly home on Wednesday, April 22,...

Send flowers to the Ott family.