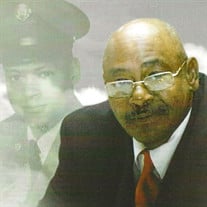 Jerry was a son, father, grandfather, great grandfather, uncle, nephew cousin, brother, friend and most of all he was different. That is why we his children took a nontraditional route on his obituary to reflect the man that we called Dad. He had several special requests and we have tried to fulfill some of them, others were just not politically correct. Jerry (Bo Bo) Bernard Wilson was born August 24, 1947 in Bailey, Mississippi to Mr. Algie Wilson and Mrs. Bertha Mae Franklin Wilson who both preceded him in death. Jerry was also the third of seven siblings: Bettye Jean Wilson (who preceded him in death), Bernadette (Wayne) Harden, Garie Nell Harden, Glenda Wilson Morrison, Markus Wilson, Kenneth (Merle) Wilson and Brother in Law, David Harden. Jerry went to Middleton School in Meridian, Mississippi. In 1968, Jerry was drafted in the United States Army. Many people know the story of how he ran from the military police and hid at his Aunt Rosalyn's house. He kept: telling the warrant officers, "Jerry is not here, you just missed him", until they showed up with a picture of him one. day. Jeffy served during the Vietnam War arid: this is where he came in contact with Agent Orange which attributed to his brain and lung cancer. Upon his discharge from the Army, Jerry no longer considered himself a solider and preferred civilian life over military life, thus rarely discussing his time in the military. Anyone that truly knew Jerry knows his real passion was working on vehicles (but he hated Fords). Jerry would assist anyone he could if they had vehicle troubles because he loved the challenge of fixing it. Jerry did have one small issue; he did not work well with others, like his brother Markus. He worked as a mechanic for many years and continued to do so until the last two months of his life. Jerry also drove public transportation in Cleveland Ohio for years before returning to Mississippi. Once back home in Mississippi, Jerry worked as a mechanic, drove truck, as well as fulfilling his dream of owning his own 18 wheeler. He loved to barbeque and had finally perfected his ribs (after Ken gave some advice, but he wouldn't admit it). Jerry was a human map when it came to giving directions and remembering how to get back to a place, even if he only went there once. Willie Mitchell, along with numerous other truck drivers, family, and friends can attest, Google Maps had nothing on Jerry Wilson. Mario called him his own personal GPS, Grandpa Positioning System. In August of 1973, Jerry was united in holy matrimony to Rosie Lee Gilson. They were married for 42 years as of August 6, 2015. They had "issues" like all couples have had, but they did not take the divorce way out. You could always tell when Jerry was trying to make it up to Rosie. He had a playlist to say what he could not, like: Let’s Straighten It Out, Shining Star (The Manhattans, not Earth, Wind, and Fire’s version”, and “It’s a Man’s World” (but it would be nothing without a woman or a girl). We guess it worked; they made it to 42 years. Mr. Jerry Bernard Wilson deputed this life on Thursday, August 13, 2015, at his home in Bailey, MS with his wife, Rosie Wilson by his side. He leaves to cherish his memory: his wife of 42 years, Mrs. Rosie L. Wilson; his three sons: Bernard Wilson of DeKalb, MS, Carlos (Catherine) Wilson of Meridian, MS, Cordell (Shena) Wilson of Starkville, MS and one daughters, Tonja Gilson of Bailey, MS; his second mother: Leerene Wilson (Big Nanny) of Bailey, MS. He has 10 grandchildren: Mario (Holly) Gilson, Kenya Gilson, Makenzie Gilson, Lenny (Chemiouxn) West, LaMeka Wilson, Avery Scarbrough, India Strickland, Takisha Wilson, Asia Temple, and Derisha Temple. He has one great granddaughter, Alaina Sofia Gilson and a great grandson that is due in October, Jaxon Bernard Scott Gilson. Jerry also leaves to cherish his memory: a host of nieces, nephews, cousins, friends (partner in crime, Mr. Petter Gunn) and saints.

Jerry was a son, father, grandfather, great grandfather, uncle, nephew cousin, brother, friend and most of all he was different. That is why we his children took a nontraditional route on his obituary to reflect the man that we called Dad. He... View Obituary & Service Information

The family of Mr. Jerry Bernard Wilson created this Life Tributes page to make it easy to share your memories.

Send flowers to the Wilson family.