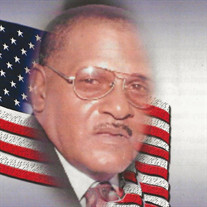 John Nelson, Jr. was born on June 28, 1946 to the late Mr. and Mrs. John Ella Anderson Nelson, Sr. in Meridian, Mississippi. John confessed his life to Christ at an early age and joined Saint Elizabeth United Methodist Church in Meridian, Mississippi where he was a faithful member and served on the Board of Trustees. John graduated from T J Harris School in Meridian MS in 1966 and attended Harris Junior College on a football scholarship. He then went on to serve in the US Army from 1967-1969 and was a Vietnam veteran after which he was honorably discharged. John joined the MPD as a Patrol Officer in 1973, and was the first African American Officer. John was a member of the Fraternal Order of Police and started Nelson Private Investigations in 2001 until his passing. John was well known in his community and he was very compassionate and discreet about helping those in the community who had needs. John had a voice in the community and will be dearly missed by all who knew and loved him. On Tuesday, May 17, 2016 a beloved Father, grandfather, brother, uncle, neighbor &friend was blessed with everlasting peace. Cherishing his memories are two (2) sons, Gregory Nelson (Nia) of Lawrenceville, GA and Jeffery White of Chicago, IL four (4) daughters, Juarez Emerson of Jackson, MS, Tracie Nelson of Indianapolis, Indiana, Tavenna Carter (John) of Meridian, MS and Kelly Nelson of Houston, Texas; three(3) sisters, Julia Felder (James), Velma Clark (Eugene) and Dorothy Jean Trotter all of Meridian, MS; thirteen(13) grandchildren,five(5) great-grandchildren, a host of special nieces and nephews, relatives &friends who loved him dearly. He was preceded in death by his parents, two brothers, William Anderson Nelson and Larry Barnett Nelson; three sisters, Johnny (Dorothy) Hosley, Mattie Patton and Emma Joe Nelson Whitlock.

The family of Mr. John Nelson, Jr. created this Life Tributes page to make it easy to share your memories.

Send flowers to the Nelson, family.