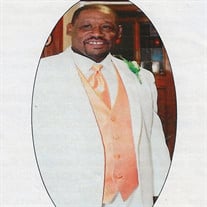 Johnnie Lee Grant, Jr. was born on Friday, June 21, 1957 in electric Mills, MS to the late Johnnie Lee Grant Sr. and the late Anna Rose Campbell Pettus. He was the oldest of eleven children. He accepted Christ at an early age and joined to Bodka... View Obituary & Service Information

The family of Mr. Johnnie Lee Grant, Jr. created this Life Tributes page to make it easy to share your memories.

Send flowers to the Grant, family.