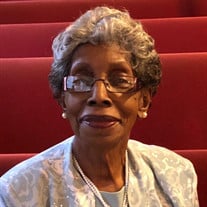 Lillie Lee Jenkins was born March 16, 1937 in Marion, MS to the late David and Marzella Clark. She transcended this earth to her eternal home December 29, 2020. In earlier years, she attended school in Marion, MS. She was employed at St. Joseph Hospital and later at East Mississippi State Hospital before working alongside her husband as a hair stylist at Jenkins Barber Shop in the heart of downtown Meridian. She was united in Holy Matrimony to Elder Calvin Jenkins. A devoted, supportive wife and a loving mother and grandmother she was. Moments in her presence would quickly reveal that her first love was God, then family. Modesty and a quiet, sweet spirit characterized her personality, but her heart for righteousness distinguished her as a spirit-filled ambassador for Christ, proclaiming His excellencies, and His desire to dwell in all. Her true-life story was a testimony of God's providence, power and promises. First Lady Jenkins was co-founder of Lively Stone Fellowship Church (LSFC) where she served faithfully with her husband who pastored the church over 30 years. Her dynamic testimony marks a standard for women, one steadfast and unmovable in her commitment to God since accepting Him as her Lord and Savior in 1978. From that very moment, she realized that the promises of God for salvation included her family. She stood on those promises by faith for her husband and six children based on the scriptures, “Believe on the Lord Jesus Christ and you shall be saved, you and your household.” Acts 16:31; “For the unbelieving husband is sanctified by the wife.” 1 Cor 7:14, “Tell your children about it, let your children tell their children and their children another generation.” Joel 1:3. In that, God honored his promises moreover. Her faithfulness gives witness to the salvation of the Lord for four generations. Her witness also extended to her sisters, their children, and her friends and their children who also came to know and serve God. First Lady Jenkins wanted all she knew to know the Lord. That was her legacy. Yet, she took no credit for that which belonged to God. With the true heart of a servant, if you asked her, she would tell you that she carried an unrelenting burden for people. Her ministry included counseling and mentoring women in the faith and encouraging them to give their whole hearts to God. Over the years, she and her husband ministered to the spirit, soul, and body of many who were hurting, hungry, homeless, and lost, often opening their hearts and their home to help those in need. First Lady Jenkins enjoyed sightseeing, cooking and spending time with family. She was a pillar of strength to her family. She was affectionately known as “Big Mama” to her grandchildren. Lillie Jenkins was preceded in death by her mother, father, brother, two sisters, as well as two of her daughters, Rosette Harris & Margaret Hutchinson. First Lady Jenkins was adored as a beautiful spirit, a sweet and gentle soul, a priceless treasure. She leaves to cherish fond memories her loving husband, Elder Calvin Jenkins; three sons, Richard (Myra) Lewis, Kevin (Bobbie) Lewis, Patrick (Tammy) Lewis, all of Meridian; and one daughter, Sherita (Timothy) Alexander of Lawrenceville, GA; She is also survived by three sisters, Marie Overstreet, Lattie Clemons, Earline Clark, two brothers, David Clark, Jr. and Joe Clark, as well as 20 grandchildren, 39 great grandchildren, nieces, nephews, other relatives, and friends.

Lillie Lee Jenkins was born March 16, 1937 in Marion, MS to the late David and Marzella Clark. She transcended this earth to her eternal home December 29, 2020. In earlier years, she attended school in Marion, MS. She was employed at St. Joseph... View Obituary & Service Information

The family of Mrs. Lillie Jenkins created this Life Tributes page to make it easy to share your memories.

Send flowers to the Jenkins family.