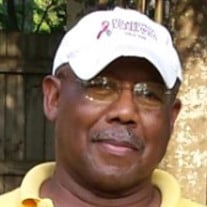 Lister B. Florence was a resident on this earth for seventy-three years. He was Called Home to be The Lord on January 15, 2021 in DeSoto, Mississippi. Lister B. Florence was born on June 26th 1947 to Thomas and Mamie Florence Jr. in Tuskegee, Alabama and was the eldest of seven siblings. After graduating from Battle Creek High School, Lister enlisted in the United States Air Force as a Bomb loader then crossed trained to a Military Intelligence Specialist. Lister's career on Active Duty would surpass twenty-one years. While on duty his tours were world-wide. During his years of service, Lister met and later married his love for life, Katie (Peach) Shanks on October 3rd 1975. Lister later retired from Active Duty Air Force at the senior enlisted rank of Technical Sergeant in April 1987. After retiring from active duty, Lister was selected for and accepted employment by the highly prestigious National Security Agency (NSA) working at Fort Meade, Maryland/Fort Gordon, Georgia in 1987. While serving in this capacity, Lister was lauded for his expertise. He later retired from the NSA after serving for more than twenty-five years. After his second career retirement, Lister and Katie moved from Augusta, Georgia to DeSoto/Hattiesburg, Mississippi. After settling, They joined Shiloh Missionary Baptist Church. There, Lister grew in the church as well as The Word of God. He served as a devout member and served operating the (Sound System) Ministry and was a dedicated member of the church. Lister also volunteered by assisting eligible elderly and military retirees with administrative support and advocacy to assist with the healthcare program applications processes. Lister drew his last breath while doing what he was best known for... helping a friend in need. That was the most predominate characteristic that exemplified the heart of "this man." Simply put, he made your mission, his mission and he worked diligently to bring it to fruition. Lister was a tall, husky, handsome fellow who casted a big shadow but had a quiet demeanor and a soft spoken nature. He always had an ear which was lent liberally, to listen to praise reports and the woes of those close to him, to provide a word-offering to encourage or comfort and a hand always made available to cheer you upward. This was Lister. He made time to be the son that an elderly Mother so wanted and needed to brighten up her life and she nicknamed him, "ListerSon." He continued to make time to visit her, even after he and Katie moved so many miles away. He was a devoted son to her and others like her. He was a neighbor and a brother to many. Lister loved to travel, loved sports cars and loved meeting and talking to people who were down to earth, like he was. He didn't wear a mask. He was a what you see is what you get-sorta guy. Lister loved his wife, Katie and his primary goal was to ensure she was happy. His dedication and commitment to his wife were evident and were without shame or apology. That was who he was. Lister always gave back to others. That was always who Lister was...even into his last breath! "His Lord said unto him. Well done, thou good and faithful servant." Matthew 25:21 Lister was preceded in death by his Father in 2007. Mother in 2009 and brother, Chester in 2020. He is survived by his wife, Katie, of forty-five years, siblings: Barbara, Pearlie, Ethel, Irene and Kevan Florence: two children, son: Lister Florence and daughter Tonya Florence, several grandchildren and a host of nieces, nephews, cousins, aunts, uncles, in-laws and life-long friends who both mourn his absence from this earth and celebrate his life and his Presence With The Lord. 2 Corinthians 5:8 DUE TO THE COVID-19 PANDEMIC, THE CDC AND STATE OF MISSISSIPPI HAVE MANDATED THE FOLLOWING GUIDELINES: Viewings: 1. All viewings are limited to one hour and no more than 10 people allowed in the chapel at one time where social distancing is not possible. 2. Temperatures must be taken upon entering the lobby. Temperatures 100 degrees or more will not be allowed to enter. 3. All visitors must wear a mask and are not allowed to touch, hug or kiss the body. Graveside Services: 1. Outdoor services are limited to 50 people where social distancing is not possible. All in attendance must wear a mask. WE APOLOGIZE FOR ANY INCONVENIENCES EXPERIENCED

The family of Mr. Lister B. Florence created this Life Tributes page to make it easy to share your memories.

Lister B. Florence was a resident on this earth for seventy-three...

Send flowers to the Florence family.