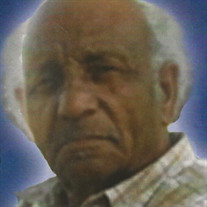 There was no one who understood the true meaning of true selfless love and caring better than Louie. He worked hard day I and day out. He was without a doubt the best husband, father, and grandfather anyone could ever dream of asking for. He was a blessing to his loved ones, as well as to those he came in contact with, this included family and friends. He was a true patriarch, provider, and leader. he was an inspiration, an excellent role model to his children and grandchildren, as well as to others who had the blessings of meeting and knowing him. Louie earned and kept the respect of so many throughout the years, whether he was truly aware of just how many loves he truly touched. He was the glue to his family, a beacon of light so bright it overpowers the sun, moon, and stars. Each sweet treasured memory he has left engraved in our hearts and minds is a gift. Ever a man of few words, he taught us all what it means to really love and care with every fiber of you, not through words, his method of showing love and caring through his actions was far better than merely speaking the three-word phrase. There will never be another Louie. Such a multilayered, beautifully complex, loving person only comes around once. Not just once in a single lifetime, but just once, period. Anyone who had the opportunity to truly know him and be in his presence was blessed. A friend and neighbor recently stated, “there will certainly be a void without Louie…” and “it was clear who was in charge when Louie was around…”. Yes there will always be only one Louie Wooten. Louie Wooten was born to the late Andrew L. Wooten and the late Annie C. Johnson-Wooten on April 7, 1938 in Lauderdale County. He was the third of 7 children. He confessed to Christ at an early age at Mt. Pleasant Baptist Church in Meridian, MS (Shucktown). He joined the Navy at an early age. To all those who knew Louie, he was a dedicated truck driver for over forty years. He had a love for driving trucks. Yes, He was recognized as one of the greatest truck drivers of all time by his co-workers. Louie was also an ordained minister. Louie was a gifted man of many trades. In 1968, he joined in holy matrimony to Betty Jean Mathis. They were more than happily married for nearly half a century, 48 years. Louise leaves to cherish his memories: his wife of 48 years, Betty Jean Wooten; two sons, Michael Louie Wooten of Bailey, MS; Christopher Bernard Wooten (Stephanie) of Collinsville, MS; one daughter, Evelyn Michele Wooten-Dunn (Marcus) of Meridian, MS; five grandchildren: Joseph Inez Wooten (Louie called “Dee Dee” of Bailey, MS; Katie Alexis Wooten of Collinsville, MS; Martinez Marez Dunn (Louie called “doodle baby” of Meridian, Ms; Christian Michael Wooten and Stephan Louie Henry Wooten of Collinsville, MS; two brothers, Albert Wooten (Dorothy) of Lynwood, CA; Mark Wooten of Bailey, MS; one siste, MAry Ellen Eggleston of Meridian, MS; mother-in-law, Rosie Mae Mathis of Willacoochee, GA; and a host of nieces, nephews, great nieces, great nephews, aunts, uncles, cousins, sisters-in-law, brothers-in-law, and friends; The following preceded Louie in death: his father, Andrew L. Wooten (1973); mother, Annie c. Wooten (2003); brother, Randy Wooten (1968), Henry Wooten (2000), and Shafter Wooten (2006)

There was no one who understood the true meaning of true selfless love and caring better than Louie. He worked hard day I and day out. He was without a doubt the best husband, father, and grandfather anyone could ever dream of asking for. He... View Obituary & Service Information

The family of Mr. Louie Wooten created this Life Tributes page to make it easy to share your memories.

There was no one who understood the true meaning of true selfless...

Send flowers to the Wooten family.