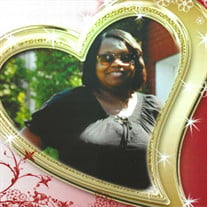 Margaret "Toadie" (Jenkins) Hutchinson was a native of Meridian, MS born on September 24, 1968 to Lillie (Clark) Jenkins. She transcended this earth to her eternal home on April 9, 2017. It was at an early age that she accepted Christ as her personal Lord and Savior. She remained a faithful and humble servant as a songstress and worship leader as well as a director of youth programming at Lively Stone Fellowship Church of Meridian, pastored by her father Reverend Calvin Jenkins. As a longtime resident of Owensboro, KY, she attended Good Shepherd Pentecostal Church with her family, but whenever visiting Meridian, often returned wholeheartedly to assist in her previous roles. Margaret was united in Holy Matrimony to her soulmate, her friend, Anthony Hutchinson, on June 13, 2010. She was a consummate mother to three children: Cor'Darius, Saniya, and Kynnedy, and she loved her family immensely. Margaret graduated from Meridian High School, went on to receive her License of Cosmetology, and later matriculated to Meridian Community College where she received her CNA Associates Degree. She gave of her heart and soul to patient care at Anderson Hospital for several years while living in Meridian. She was continuing her educational pursuits in the nursing profession, studying for an LPN license at Owensboro Community and Technical College prior to launching a very successful entrepreneurial business with her husband, Anthony, in Kentucky. Together they founded Fresh Step Cleaning Services, a first-class carpet cleaning and commercial property cleaning service, where she became her husband's biggest cheerleader, supporter, and co-business owner, wittily referring to herself as the "Queen Boss." Amid a busy schedule, she still found the time to volunteer countless hours at Foust Elementary School where her children attend. Her talents were many and multi-faceted, but the job she took the most pride in was that of being Momma to her most prized possessions. Being there for her son and raising her girls in a loving, Christian home was always top priority. Margaret was adored by all she encountered ... a sweet soul, a gentle giant, a cherished treasure with an infectious laughter that would light up any room. Her kept it cool, calm and collected demeanor, her smile, her giving spirit, her warm and caring heart, that is how she will be lovingly remembered. She leaves to cherish these memories her loving and devoted husband, Anthony Hutchinson; a wonderful son, Cor'Darius "Corey" Edwards; two darling daughters, Saniya "Gabby" Hutchinson and Kynnedy "Schunka" Hutchinson, all of Owensboro, KY; She is also survived by her beloved mother, Lillie Jenkins; her father, Calvin Jenkins; three brothers, Richard Lewis, Sr. (Myra), Kevin Lewis (Bobbie), and Patrick Lewis (Tammy), all of Meridian; one sister, Sherita Alexander (Timothy), of Lawrenceville, GA; one foster brother, Derrick Daniels, as well as many nephews, nieces, relatives and friends. Mrs. Margaret Hutchinson is preceded in death by her sister, Rosette M. Harris.

Margaret "Toadie" (Jenkins) Hutchinson was a native of Meridian, MS born on September 24, 1968 to Lillie (Clark) Jenkins. She transcended this earth to her eternal home on April 9, 2017. It was at an early age that she accepted Christ as her... View Obituary & Service Information

The family of Mrs. Margaret Felisha Hutchinson created this Life Tributes page to make it easy to share your memories.

Margaret &quot;Toadie&quot; (Jenkins) Hutchinson was a native of Meridian,...

Send flowers to the Hutchinson family.