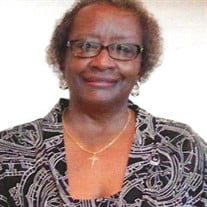 Today we celebrate the life of Marietta Jones, who transcended her earthly temple to the most divine temple imaginable on January 9, 2017, in Canton, GA Marietta was born on November 26, 1947 in Meridian, MS to Chester Lee Jones of Meridian, and Druscilla Dixon of Shubuta, MS, both of whom preceded her departure. While attending Mississippi Valley State College, Marietta met Harold Dean. Following graduation, she married Harold in Yazoo City, MS in 1970. From that union, her heavenly Father blessed them with two children, Saida and Marshall. Their union didn't end the way either of them predicted, or in her words "God saw fit for us to be together; then God saw fit for us to be apart." Nonetheless, Marietta was at peace with Harold, openly praying for his health and asking others to do the same. She believed that they were both blessed to have born God's gifts, and equally responsible for making sure they inhaled and exhaled love. Prior to retiring from Bell South after nearly 30 years of fulfillment, Marietta served as a teacher in the Mississippi delta. She embodied the motto of "once a teacher, always a teacher" carrying that pedigree into her career at Bell South where she ascended from operator to management, frequently assigned the tasks of training people along the way. She retired while working in Atlanta, and while she certainly earned success at Bell South, there are many who would argue that she missed her true calling-being a chef. She was renown for her culinary and baking skills, which she credited to her the teachings of her grandmother, Willie, as well as her beloved Aunt Sally (Letcher Jr.). She was affectionately known as "Treats" by her children and grandchildren for the goods she baked. She was also repeatedly hired to bake goods during her tenure at Bell South and in the Meridian and Atlanta communities. Upon her retirement, Marietta moved back to Meridian to take care of her ailing uncle, Letcher "Fat" Jones, Jr. She eagerly dove back into life at St. John, rejoining the choir and attending bible study. Marietta cherished her St. John family because to her, that's just what St. John was-family. She was a proud Jones first and proud St. Johnian second. In addition to her parents, she was preceded in departure by her uncle Fat Jones, an aunt, Mary Lee Key, her cousins Larry Edward Jones, Daniel Raymond Jones and Shirley Ann Jones Daniels, all of whom were more like siblings to Marietta than cousins, and her grandparents Letcher Jones, Sr. and Willie. She leaves to cherish her countless warm memories a daughter, Saida Dean Holt of Columbus, MS and a son, Marshall Dean, of Atlanta, GA; four grandchildren Sydney and Jonathan, both of Columbus, MS, and Brentley and Brooklyn, both of Atlanta. She also leaves · to cherish her memories, a brother, Curtis Parker; Cousins: Wiley Key, Jr., Riley Key, Johnnie May Key, Shannon Jones, Anthony Jones, Patrick Jones, Derrick Daniels, Angelia Daniels, and a host of special friends and extended family that she loved dearly and they felt the same about her.

Today we celebrate the life of Marietta Jones, who transcended her earthly temple to the most divine temple imaginable on January 9, 2017, in Canton, GA Marietta was born on November 26, 1947 in Meridian, MS to Chester Lee Jones of Meridian,... View Obituary & Service Information

The family of Ms. Marietta Jones created this Life Tributes page to make it easy to share your memories.

Today we celebrate the life of Marietta Jones, who transcended...

Send flowers to the Jones family.