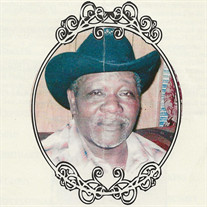 Melvin Gowdy was born September 26, 1950 to Lucy and Cleveland Gowdy of Lauderdale, MS. He joined Oak Grove Baptist Church at an early age. Mr. Gowdy was a logger for Ralph Morgan for many years. He later married Minnie Gowdy, and unto this... View Obituary & Service Information

The family of Mr. Melvin Gowdy created this Life Tributes page to make it easy to share your memories.

Send flowers to the Gowdy family.