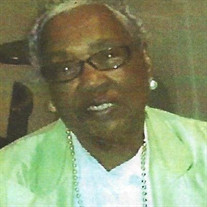 Mildred King was born to the late Lily and Melvin Thomas on May 29, 1926 in Enterprise, Mississippi. She was called home to be with her heavenly father on October 9, 2016. Mildred was one of 10 children. She was raised on a farm and was assigned daily chores before school She had many stories of walking to Boyd school in Enterprise and the troubles that would occur along the way which usually involved her brothers. Many people did not know she was a twin. She and her twin brother Milton were very close and would share in puns and punishments. Mildred was a faithful member of New Hope Methodist Church during her early years. When she was only 16 years old, and to the dismay of her father, she married Shelly Lee King in May 1943 and to this union they had six children. After she was married, she joined her husband's church. She was a member of Wesley Chapel United Methodist Church until it closed. She then moved her membership to Little Zion United Methodist Church where she attended until her passing. She was a faithful member in all of her churches. Mildred held positions such as the president of the United Methodist Women and treasurer. She loved attending church and enjoyed being with her fellow members. Mildred was a stay at home mom for the first few years of married life. In the early 1960's she went to work as a housekeeper. During this time, she became active in the Civil Rights Movement in Enterprise. She and her husband Shelly became members of the NAACP. She was spurned on to register to vote due to having a very active Civil Rights leader in pastor, Reverend J.C. Killingsworth. She often spoke that she never took the right to vote for granted because she witnessed the movement and what it took for African Americans to gain this power. Mildred was very much aware of the politics of then and now. She often spoke of how privileged she felt to witness seeing the first elected African-American president. Also during this time period, she was convinced her children should be among the first to attend the integrated Enterprise Schools. Mildred wanted her children to have the best education so she and Shelly were also encouraging and steadfast when it came to sending their children to college. She often spoke this would happen by "making a way out of no way". In the 1970's Mildred went to work at Golden Sunset Nursing home where she worked as a nurse's aide and then later a Culinary Specialist. She worked at this facility for over 25 years and became lifelong friends with many of her co-workers. Many of the patients and relatives of patients often thanked her for her un-ending love of caretaking. After retirement from this facility, she decided to do private duty health care. Mildred was highly sought after as a nurse's aide and companion to many Alzheimer's patients. In May of this year, Mildred celebrated her 90th birthday with family and friends. This was a joyous occasion for her and was extremely delighted to share this occasion with some of her sibling's children. She felt loved and appreciated and expressed how grateful she was to her Heavenly Father to have reached this golden age. Mildred thanked everyone for their continued prayers and wished everyone love, peace and blessings. Mildred is preceded in death by her husband, Shelly Lee and her son. Bernice Lee and all of her siblings. She leaves to cherish her memory; Sons: Thomas King and Shelly (Betty) King; Daughters: Loreata (Leon) Adams, Eva Faye (George) Bartley; Deborah (Wayne) Cobb. Mildred had 13 grandchildren, 10 great grandchildren and a host of nieces, nephews, cousins and friends.

Mildred King was born to the late Lily and Melvin Thomas on May 29, 1926 in Enterprise, Mississippi. She was called home to be with her heavenly father on October 9, 2016. Mildred was one of 10 children. She was raised on a farm and was assigned... View Obituary & Service Information

The family of Ms. Mildred King created this Life Tributes page to make it easy to share your memories.

Mildred King was born to the late Lily and Melvin Thomas on May...

Send flowers to the King family.