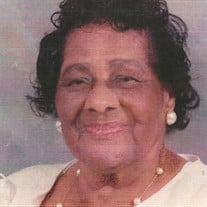 It was a beautiful, warm and sunlit day on October 19, 2016, when the angels came and carried Mother Oneida Hopper, at the age of 101 years old, to her eternal home from her residence. The scripture tells us "to be absent from the body is to be present with the Lord". II Corinthians 5:8 Mother Oneida Hopper, the only child of the late Ike and Corene House Odom, was born on May 22, 1915. She attended school in Waynesboro, MS where she graduated with an eighth grade diploma, equivalent to a present day twelfth grade diploma. Mother Hopper accepted Christ at an early age at St. Luke Missionary Baptist Church in Waynesboro, MS. Upon moving to Meridian, she joined Thirty-first Avenue Missionary Baptist Church and was a faithful and lifelong member until her health failed. She loved her church members, Dr. S.L. Thompson and First Lady Tammy Thompson. She loved her seven children and their training began in the church. She read and taught them the Holy Bible and their first spiritual teaching and learning experience began in the home around the fireplace with bible study on Saturday nights, where she taught them the Lord's Prayer, the Twenty-third Psalm and the Ten Commandments. Mother Hopper was a devout, deep rooted, strong Christian, filled with the Holy Spirit. She nurtured her children and the "Redline" neighborhood with a firm disciplined hand, filled with love and respect. She was a spiritual role model in the home and community. Her faith was rooted in the Lord. She worked as a cook until her retirement. She always shared her meals with the "Redline" neighborhood and community. Mother Hopper married John Hopper, who preceded her in death. To this union, three girls were born, Corene and Irene( twins), and Peggy. She later united in holy matrimony with Herman "Buddy" Adams. To this union four children were born, Jo Ann, Irma and Herman, Jr. (twins) and Oliver Eugene. Herman, Sr., Herman, Jr. and Oliver Eugene, preceded her in death. She was also preceded in death by two sons-in-law, Lewis Brown, Chicago, IL and Tommy Hooper Sr., Dallas, TX. Mother Hopper will continue to live in the hearts, memories and spirit of her five girls, Corene Rue, Peggy Hopper, and Jo Ann Hooper, Meridian; Irene Brown, Chicago, IL and Irma Washington, Milwaukee, WI; nineteen grandchildren; ten great grandchildren; six greatgreat grandchildren; her special "Little Angel" her great-great grandchild, Deontae Hopper; a devoted Goddaughter, Kathy "Fat Cat" Naylor; a host of cousins, "Redline" children, other relatives and friends. She loved them all.

It was a beautiful, warm and sunlit day on October 19, 2016, when the angels came and carried Mother Oneida Hopper, at the age of 101 years old, to her eternal home from her residence. The scripture tells us "to be absent from the body is to... View Obituary & Service Information

The family of Mrs. Oneida Hopper created this Life Tributes page to make it easy to share your memories.

Send flowers to the Hopper family.