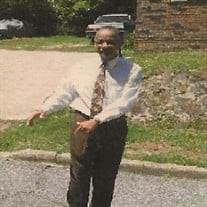 Rogers Anthony Watson pa,;sed away on December 17, 2015 from a massive heart attack at Anderson Hospital in Meridian, MS. He was born uly 13, 1963 the youngest of four children to the parents ofRobert Sr. and Deloris Watson in Chicago, IL. Rogers was a self-made man who strived hard to have the American dream and live a happy life. He endured many obstacles and tragedies including the death of his mother as a child, but he worked hard to earn his keep in life. His dreams would lead him to accomplish many notmal, but satisfying goals. He had a big heart and will help his family and friends at times of need. Rogers was known to family as "Rogers", to the ladies as "Anthony", and to friends as "Rogers Rabbit". He had no children, but had many family members whom he helped raise and offered support to. Rogers had a way of learning how to survive on a very small budget and he know how to ball and have a good time on a large budget. He would say "You got to make your next move your best move." He liked fancy and fast cars, campers, and nice dress suits. He enjoyed fishing, camping, and spending time with family and friends. Rogers is preceded in death by his parents, Robert Sr. and Deloris Watson, and his nephew, Miguel Alcaraz. He is suivived by three siblings which includes one sister, Daisy (Willie) Edwards, two brothers, Robert Jr. (Doris) Watson, and Michael Watson all of Meridian, MS. Rogers leaves behind two nieces Kihija (Timothy) Payne ofMeridian, MS, Vashondra (Henry Jr.) Sterdivant ofTupelo, MS, three nephews Maximino Alcaraz of Tracy, CA, Vashon Edwards of Chicago, IL, and Roshard Watson of Dallas, TX. He leaves to cherish his memories several great nieces, great nephews, cousins, and a great nephew, Omiyon Alcaraz of Meridian, MS, who held a special place in his heart. Also, he leaves behind a special friend, Francis Issac of Atlanta, GA, whom he loved. Rogers will be in the memory of many friends that he had as life-long friends.

Rogers Anthony Watson pa,;sed away on December 17, 2015 from a massive heart attack at Anderson Hospital in Meridian, MS. He was born uly 13, 1963 the youngest of four children to the parents ofRobert Sr. and Deloris Watson in Chicago, IL. Rogers... View Obituary & Service Information

The family of Mr. Rogers Anthony Watson created this Life Tributes page to make it easy to share your memories.

Send flowers to the Watson family.