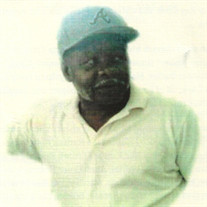 Roosevelt Cook, Jr. was born June 18, 1949 to the late Roosevelt Cook, Sr. and Mary Louise Cook of Lauderdale, Mississippi. He was preceded in death by his brothers Johnny Ray Cook and Calvin Cook; and his son, Robert Brown. He leaves to cherish... View Obituary & Service Information

The family of Mr. Roosevelt Cooks Jr. created this Life Tributes page to make it easy to share your memories.

Send flowers to the Jr. family.