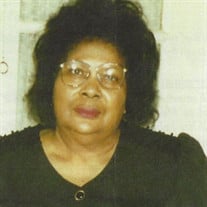 Our mother, grandmother and great-grandmother transitioned peacefully in her sleep to spend eternity with our Heavenly Father. She truly loved the Lord and believed in the power of prayer. Stella was the youngest child of twelve born to Rev.... View Obituary & Service Information

The family of Mrs. Stella Carter Gordon created this Life Tributes page to make it easy to share your memories.

Send flowers to the Gordon family.