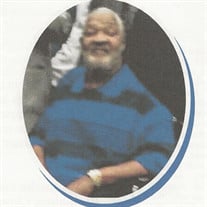 Steve Allen Rogers was born on July 17, 1957 in Chicago, Illinois at Cook County Hospital. He attended school in the Chicago Public School system. He departed this life on February 24, 2015. Steve was preceded in death by his father Kyi Rogers... View Obituary & Service Information

The family of Mr. Steve Allen Rogers created this Life Tributes page to make it easy to share your memories.

Send flowers to the Rogers family.