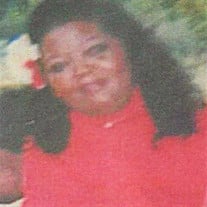 Virginia Brown was born on May 18, 1957 to the late George Brown and Cora Twigg Brown. She confessed Christ at an early age. She was blessed with one daughter, Robin Brown Williams; one son-in-law, Lorenzo Willians Sr.; and seven grandchildren... View Obituary & Service Information

The family of Ms. Virginia Brown created this Life Tributes page to make it easy to share your memories.