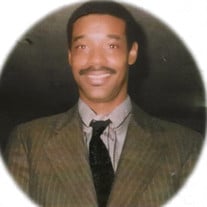 Willie Gregory (Timmy) Kimbrough was born September 3, 1958 in Meridian, MS. He was the fourth child born to the union of Bertha Russell Kimbrough and the late Willie Kimbrough Jr. Willie grew up as a young child in Meridian. He attended Meridian Public Schools and Sunlight Baptist Church. He later moved to Racine, Wisconsin and graduated from Horlick High School. He worked various jobs in Wisconsin and Meridian. He was a mechanic by trade. He could fix just about anything and if couldn't fix it, he would tell you who could. He would lend a hand to anyone in need. He loved the outdoors and being close to nature. He also loved to read, tell funny stories and watch television. He was a kid at heart and he was knowledgea-ble about many things. He loved his family and he loved God. Willie was recently baptized on June 28, 2018 by Chaplin Wallace of Harper's Hospice; We know that the Angels in Heaven rejoiced that day as we did and Jesus was preparing a place to receive him. Willie was preceded in death by his father Willie Kimbrough Jr, Grandmothers: Rosie W. Mack and Addie H. Williams; Grandfather: Miliner Russell; also a host of Uncles and Aunts, with special mention of Carter and Helen Jackson and Virginia W. Jones. Willie is survived by his daughter Vanessa Kimbrough and son Timothy Kimbrough both of Racine, Wisconsin; Mother: Bertha Kimbrough; Four Sisters: Sherria Kimbrough; Linda Hodges (Arthur); Barbara K. Robinson; Helen Johnson (Stanley) all of Meridian, MS; Five Brothers: Michael Kimbrough Sr. (Cathy) of Meridian. Willie P. Jordan, Jerald D. Jordan, Jeffery S. Kimbrough, Tony L. Kimbrough and Step Mother: Mary Kimbrough, all of Racine, Wisconsin. Three_ Aunts: Edith Russell, Rosemary Nelson (Fredrick) of Shubuta, MS and Ceola Russell of Erie, PA. A Dear Cousin: Bettie Cook of Bridgeport, CNA special friend Elizabeth (Weedie) Clay, Family, a host of nieces, nephews, other relatives and friends.

Willie Gregory (Timmy) Kimbrough was born September 3, 1958 in Meridian, MS. He was the fourth child born to the union of Bertha Russell Kimbrough and the late Willie Kimbrough Jr. Willie grew up as a young child in Meridian. He attended Meridian... View Obituary & Service Information

The family of Mr. Willie Gregory Kimbrough created this Life Tributes page to make it easy to share your memories.

Send flowers to the Kimbrough family.