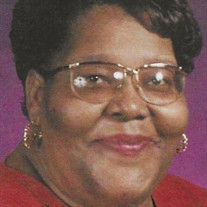 On December 24, 1955, in Meridian, Mississippi, Howard and Mae Cathel (McKenzie) Bridges was blessed with their "angel': their third child and their only girl, Yvonne Jurisha Bridges. Yvonne received her early education from the Meridian Public School System, and later attended, Alcorn State University, where she sang in the university choir. She worked many years in the Meridian Public School District, at Wechsler, Witherspoon and Crestwood Elementary Schools and Hope Village until her retirement. "Sister", as she was affectionately called by her mother and brothers (Allen and Earnest), joined First Union Missionary Baptist Church, under the leadership of Rev. R. S. Porter. She was a member of the Junior Choir and later became a member of the Inspirational Choir, until it was disbanded. She was an active member of the Sunday School with the Young Adult class and worked with the Christmas and Easter programs for many years. During the Christmas dinner, she assumed the responsibility of making the "much looked for turkey salad;' from her mothers recipe, and kept the tradition going until her health failed. Her hobbies included, completing "fill-in-puzzles, reading, watching T.V. and enjoying talking to family and friends (via telephone), and taking care of "Pretty Boy”. She was preceded in death by her parents and her oldest brother, Howard, Jr. She will be greatly missed by her son, Brandon and his wife Daphne; granddaughter, Danielle Elaine; two brothers, Allen Gilbert and his companion Alberta of Los Angeles, CA, and Earnest Charles and his wife Natasha of Converse, TX; aunt, Dorothy Hubbard, New Orleans, LA; great aunt, Dora Lee Barnett, Barnett, MS; niece, Danielle Marika Bridges, Chicago, Ill; nephew, Zerian Bridges, Converse, TX; dedicated friends, Rose Borders, Carolyn Russell, Annie Laura Stennis and Eris Jordan; a host of other relatives, friends, and her long time companion, her pet parakeet, "Pretty Boy.”

On December 24, 1955, in Meridian, Mississippi, Howard and Mae Cathel (McKenzie) Bridges was blessed with their "angel': their third child and their only girl, Yvonne Jurisha Bridges. Yvonne received her early education from the Meridian Public... View Obituary & Service Information

The family of Ms. Yvonne Jurisha Bridges created this Life Tributes page to make it easy to share your memories.

Send flowers to the Bridges family.